So, now...the flight is booked, some safety things have been put in place, the mini van with car seat has been reserved, and I've secured a stroller rental once I get there. What's next?

Besides the overall anxiety of traveling across the country with an unpredictable autistic kid, the next thing on my list to tackle was going to be activities on the plane. Boston to San Diego is a long haul for anyone, but when you're going on 4 and the furthest you've been is a car ride to Vermont, this was going to be a challenge. I envisioned a complete meltdown where the plane would make an emergency stop or a quick u-turn to toss us both off the plane. So, activities were paramount.

As with anything I do these days, I immediately went to Pinterest, Etsy, and Google and did a variety of searches for: busy bags, DIY toys, toddler projects, etc.

Testing, testing...1, 2, 3
One thing I did do was to make the item, test it out on him to see if he liked it and them put it away in a secret spot, not to be seen again until the airplane. I was worried about making things he'd care little for and then be stuck on the plane with boring activities. While many people say to wait until the trip for your child to see anything so that it's new and exciting, I really didn't want to be stuck on a plane with activities he didn't care about.

Here are the ones I actually decided to make:

Stories on a Stick
I like the idea of little puppets on tongue depressors to tell a story. I found these three on the Preschool Printables blog. Lots of great printables, so check them out. 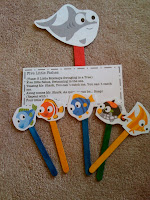 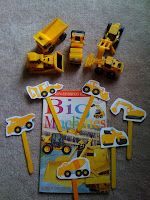 Becuase my son loves Daniel Tiger, I printed out this image and cut the characters out on my Silhouette Cameo and pasted them to tongue depressors along with a picture of the trolley. I plan on finding or writing a little story to go with them. I'll keep you posted on that.

While these were drying on my desk, he wanted to play with them so badly and kept picking them up and wandering off with them. Into the stash they went.

He already has the Curious George magnet play set and I plan on bringing it with us on the plane. It's not really big, perhaps the size of a half sheet of paper, but the pieces are small and I found out the hard way that when dropped, the magnets pop off and go everywhere.

I did go a little crazy and bought every package of shape. They are small and you can get 3 for $1, so I got them all.

If you do this, I strongly suggest NOT using neodymium magnets. They are too strong for this project and little hands and tend to pull out of the glue and stick, without the shape, to the metal.

I loved this idea of fishing with magnets, so I made a set for my son. I didn't follow the pattern so that all the fish were the same size or anything like that. I cut out two fish shapes (eye-balled it), and then glued a paper clip to the inside so that a little loop was sticking out the top.

Then I used a neodymium magnet and glued it using E5000 glue to the tip of a dowel and let him pick up the fish.

I tested it out first. He loved just picking up as many fish as possible and walking around with them. You have to be careful of kids running with the dowel. You can always make the fishing rod with string and short stick.

Once I saw how much he liked it, I put this in the secret place.

Felt Fun??
I saw so many activities with felt that I knew I had to make some of these. I have to say while they are adorable and I figured he'd enjoy them, these were not the big hit I expected them to be.

I made this one and tried it out. He liked it for about 3 minutes.

While I didn't go to this amount of detail, I did make some cars, a road, tress, and house. Again, he had about 3 minutes of this before he wandered off.

Lastly, I made roads like these and packaged them up with some new cars. I didn't introduce him to this activity since this one will be for the hotel room. I don't want to be picking up cars that roll away the entire flight. I know he'll like the cars, not sure about the roads. We're still 4.5 weeks away from our trip, so I will be making more activities for him for the plane ride.